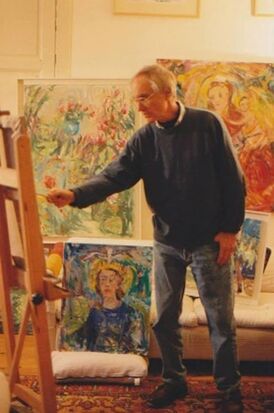 ﻿
William Weyman is originally from Atlanta Georgia. He lived in Savannah for a short time in the early eighties, but spent most of his life in Cézanne country, in and around Aix-en-Provence, France. It was there he met, worked, and taught with the artist and reputable Cézannian, Leo Marchutz. with Marchutz, and artist and friend Sam Bjorklund, he co-founded the Marchutz Art School in Aix in 1972. After fourteen years in the southwest of France, and a brief period in Costa Rica, he and family moved permanently to Savannah. He and his wife Jacqueline Carcagno Weyman established the Daedalus Gallery in October, 2005. Weyman’s works are represented in collections in France, Monaco, Germany, England and in the United States.

At the Marchutz School Weyman taught seminars in art history and art criticism as well as plein aire classes in landscape painting. He wrote many art reviews for the old Georgia Gazette when he first lived in Savannah, and is now finishing a book: “Sight and Insight; The Art of Looking at Paintings.”

​Over the years Weyman has acknowledged the influences of Rembrandt (especially Rembrandt’s drawings), Cézanne, and Oskar Kokoschka, a combination which lends his work both expressionist spontaneity and classical structure.﻿

Your "Ascension" has the quality of this poem.
Donald Ambrose